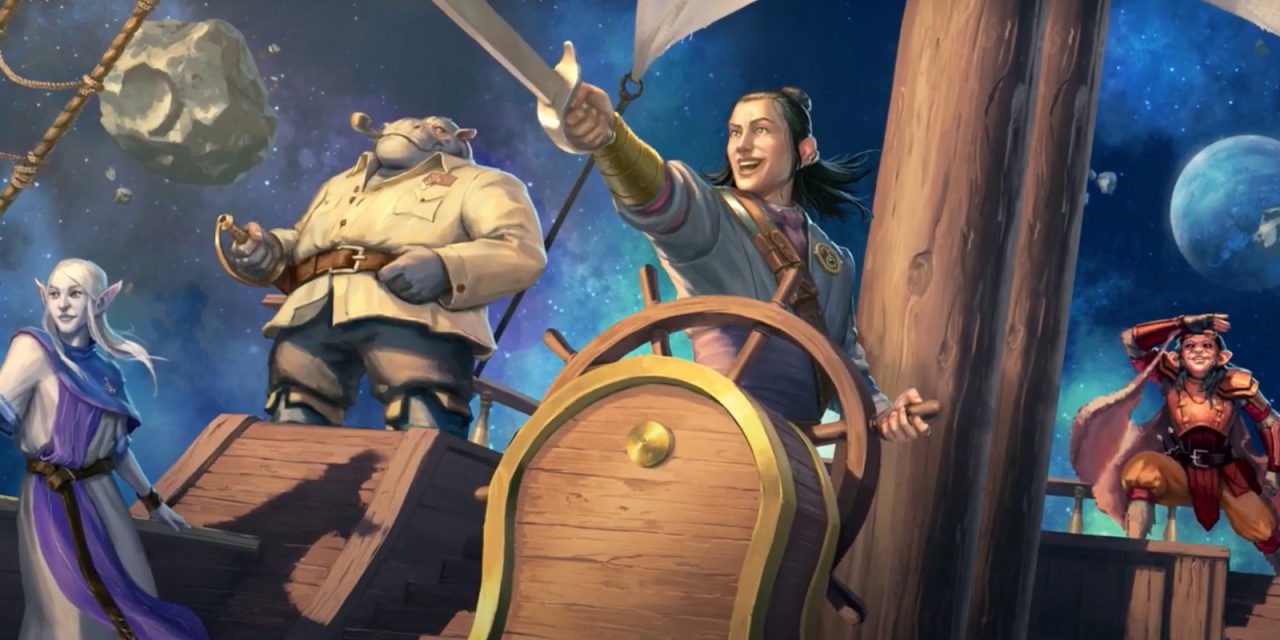 The release of Spelljammer for D&D 5e brought a ton of new options and goodies into the game. But I think the six new playable races just might be my favorite addition!

Whether you’re looking for space elves, sentient oozes, mechanical gnomes, or more, there’s no limit to the types of creatures you might encounter when navigating the Astral Sea!

So today we’re looking over the new races for D&D 5e introduced in the Spelljammer: Adventures In Space set!

Kicking things off, we have the Astral Elves.

Venturing from their home in the Feywild to the Astral Plane, these Elves wanted to be closer to their gods. They are well-known explorers of the Astral Plane and most have lived impossibly long lives even by Elvish standards!

It’s not that Astral Elves have no concept of time, but it isn’t something that has any real importance to them.

With such a long existence, some might find themselves becoming more reclusive and withdrawn. However, others might relish the call of adventure with the promise of seeing and experiencing something new.

Perhaps the thing that most stands out about the Astral Elves is the twinkling gleam of starlight in their eyes. After all, their souls have been marked with a spark of divine light!

Like other Elves, Astral Elves gain the Darkvision and Fey Ancestry traits. What makes them unique, though, is their Ancestral Fire, Starlight Step, and Astral Trance features.

Astral Fire gives you a free cantrip. You can choose Dancing Lights, Light, or Sacred Flame. Additionally, you get to choose what your spellcasting ability is (Intelligence, Wisdom, or Charisma) for your chosen cantrip.

Starlight Step is a handy teleportation trait. Being able to “poof” 30 feet away as a bonus action is great. Doing so without using a spell slot is simply excellent!

Lastly, Astral Elves’ version of the Elven Trance comes with the added benefit of letting you choose one skill and one weapon or tool to gain proficiency with until the end of your next long rest.

The genius engineering that rock gnomes are so famous for is also responsible for creating the Autognomes.

These are small, mechanical beings originally created to help their creator out with a number of various tasks. However, some circumstances might lead to an Autognome striking out on its own adventure.

Its creator might have died and, after many years in isolation, the Autognome decides to venture out into the world. On the other hand, venturing into the world for a special mission might have been the very reason it was created in the first place!

Autognomes are small creatures but their movement speed of 30ft makes them slightly faster than most smaller races.

Their mechanical nature gives them an enhanced armor class thanks to their casing. Additionally, they resist poison, have advantage on saves against poisons and paralysis, and are immune to disease. Of course, they also don’t need to eat, drink, or breathe.

Rather than sleeping, Autognomes can remain stationary (but conscious) for 6 hours to gain the benefit of a long rest.

Autognomes also gain two tool proficiencies of their choice and can also add bonuses to attack rolls, ability checks, and saving throws they make that would otherwise fail.

Oh, and don’t worry about healing. While the Mending spell can be used to help an Autognome heal themselves, several healing spells still work on them!

The Giff once had a homeworld, but it has been long forgotten. Despite this, Giff are exceptionally well known as astral explorers in Spelljammer.

Like the Astral Elves, Giff possess a divine spark within themselves. However, the Giff are instead able to channel this spark through their weapons.

When hitting an enemy with a simple or martial weapon, the Giff’s Astral Spark lets them add in extra force damage equal to their proficiency bonus.

Because of their broad, hippo-like build, Giff tend to be quite strong and sturdy. In fact, they have advantage on Strength-based ability checks and Strength saving throws!

Additionally, they count as one size larger when determining how much they can carry, lift, push, or drag.

Another benefit of their hippo-like anatomy is their increased swim speed. In the Giffs’ case, their swim speed is equal to their walking speed (default 30ft).

But we can’t forget to mention the Giffs’ love of firearms.

Giff start with proficiency with all firearms and they also ignore the “loading” property of those firearms. If they are trying to attack an enemy at long range using a firearm, they don’t have to worry about the disadvantage that would normally come with that.

Lengthy and passionate debates exist in both D&D lore and in real life about how to pronounce “Giff.” Even the Giff themselves disagree on its pronunciation.

Much like the similarly named file type, there is disagreement about whether the “g” is hard (as in “great”) or soft (as in “gentle”).

The Hadozee are my personal favorite of the new races in Spelljammer.

Long ago, the Hadozee were small and timid creatures. Over time they developed flaps of skin that function as wings to help them glide away from predators.

As time and evolution worked their magic, the Hadozees were eventually able to leave Yazir behind and take to the stars.

These days, Hadozees are known for their adaptability.

As simian-type creatures, Hadozees are great climbers and have a climb speed equal to their walking speed.

Additionally, they can use a bonus action to use their feet to manipulate objects, open/close doors or containers, or pick up tiny objects.

Their Hadozee Resistance trait lets them reduce any damage they take using a reaction. The amount reduced is 1d6 + their proficiency bonus.

But we can’t forget their ability to glide!

Stretching out their wing-like flaps, a Hadozee can use their reaction to reduce falling damage they would take to 0. Additionally, they can move 5 feet horizontally for every 1 foot they descend at no extra cost!

Perhaps the most interesting of the new races in Spelljammer are the Plasmoids.

These amorphous oozes will often take a form similar to that of whoever they are around, but they aren’t necessarily shapeshifters. There’s no doubt that you’re talking to a Plasmoid.

Everything about the Plasmoid is alien in an interesting and exciting way. Absorbing dyes allows Plasmoids to change their color, food is consumed by osmosis, and they breathe through pores.

When playing a Plasmoid, you can choose if you would prefer to be a medium or small creature. Either way, they have a standard walking speed of 30 feet.

As ooze creatures, Plasmoids have a natural resistance to acid and poison damage. They also make saving throws to resist being poisoned at advantage.

But what really stands out about Plasmoids is their amorphous nature.

Because they can squeeze through openings as narrow as 1 inch wide, they can make for excellent infiltrators. Especially with their Darkvision trait!

Additionally, they have advantage when trying to grapple another creature or escape from being grappled themselves!

Plasmoids can also reach out with a pseudopod that is up to 10 feet long to help them interact with objects. They can use this to open doors or containers, pick up objects, or pretty much anything other than attack, activate magic items, or lift more than 10 pounds of weight.

Whether you want to take the general form of a humanoid, a blob, or something completely different, the options are limitless with Plasmoids!

Finally, we come to the insect-like Thri-Keen.

While these creatures were already present in the 5e Monster Manual, they are now a playable race in Spelljammer!

Most notably, Thri-Keen have two pairs of arms, antennae, and a protective carapace that can change colors to help them blend in with their environment. This carapace gives them a boost to their armor class in addition to giving them advantage on Stealth checks.

Between that, their natural darkvision, and the fact that they don’t require sleep (but must still rest) make Thri-Keen exceptionally vigilant guards.

Waving their antennae and clicking and clacking their mandibles to communicate, Thri-Keen can’t speak other languages without the assistance of magic.

However, they do have telepathy which allows them to communicate with willing creatures within 120 feet of them that they can see. If that creature understands one language, it can communicate with the Thri-Keen this way.

Thri-Keens’ extra set of arms can manipulate objects, open/close containers or doors, and even wield a weapon that has the “light” property (like a dagger or handaxe).

Do you want ants? Because features this cool is how you get ants! Spelljammer: Adventures in Space (D&D Campaign Collection)
$46.88
Order on Amazon! Read the Review!
We earn a commission if you make a purchase, at no additional cost to you.

But that covers the new races in Spelljammer for D&D 5e.

I really like the Hadozee, but the Plasmoids are a close second for me. But there isn’t one that seems to fall flat, so it’s a little difficult to pick!

What’s your favorite? Let’s chat in the comments!