Several weeks ago, my Wednesday night game got kinda… weird…

The party made contact with a community of gnomes. We required their assistance in brewing a potion to cure an important NPC.

The gnomes were happy to help as we had assisted them with some of their own recent troubles.

But it was the celebration afterwards that led to the creation of a new creature in our campaign: the Flaggenvyper.

I’m playing with a pretty cool program that’s useful for making homebrew monster stat blocks, so I figured I’d go ahead and formally create this strange new creature for our game. (I’ll likely be doing a write-up on the program in the very near future!)

So… what exactly is the Flaggenvyper?

Sometimes the Mushrooms Bite Back

I’m a player in this campaign. My character is Dorgan Kalazan, a timid half-orc Druid who is adventuring to find himself and learn lessons to bring back to his Druidic circle.

When the gnomes’ celebration eventually led to them serving up a powerful mushroom wine with psychedelic effects, Dorgan was conflicted. He has a certain naïve view of situations like this and didn’t want to seem rude to the party’s hosts.

The dice just weren’t in my favor that night. I don’t believe I rolled higher than a 7 on any of the multiple Constitution saves that the festivities required.

Dorgan looked around and saw his party members and the gnomes all in psychedelic stupors. Feeling the effects of the wine begin to take hold coupled with his anxious impulse to escape any unclear social situation, he did what any Druid would do in his shoes: he tried to Wild Shape and get away.

We (the players) were all laughing and I really enjoyed how creative the group’s DM was with this situation.

As Dorgan attempted to Wild Shape, he began rapidly shifting through numerous forms (much to the wonder of everyone around him) but was unable to maintain any of them.

Until he had somehow turned into a strange serpent-like creature with the head of a rabbit and numerous colorful mushrooms growing from its body.

“Dorgan” said the DM trying to contain his laughter, “you have gained a new Wild Shape option once you come down from this trip.”

Thus, the Flaggenvyper was born.

The first version of the Flaggenvyper existed solely as a Wild Shape option for my character.

It could speak Draconic and only had a simple Bite attack.

However, anytime that my character would assume that form (as we would later discover), it immediately brought on the same psychedelic experiences that the party had with the gnomes.

Our Bard began wading in invisible water and calling our attention to the fish that she was trying to catch.

The Paladin searching everywhere for his trusty steed proceeded to ride piggyback on the Wizard, who immediately fell over under the weight of the Paladin and his heavy plate armor.

It was good for a laugh and I’d occasionally discreetly Wild Shape into this form at the end of the night as a joke.

There wasn’t a ton of practical use for this form, but it was hilarious.

After the first appearance of the Flaggenvyper, the DM later sent me the picture he made of it. A few weeks later, we’d begin talking about making this into something that could actually be useful in some situations.

As funny as the effects were, it needed to be able to do something other than incapacitating anyone who had experienced the gnomish mushroom wine. After all, in most situations that would exclusively mean the rest of my party.

With some playing around, we’ve arrived at version 2 of this strange creature.

There is still a level of risk to everyone on the battlefield, but there’s also the potential for it to be useful.

Simply laying eyes on the Flaggenvyper is enough to hypnotize many people. While this effect only lasts for 1 minute and functions as the hypnotic pattern spell, that can make all of the difference in combat.

In most situations, this is the opportunity for the Flaggenvyper to make a quick escape. However, it does have the ability to unleash a powerful psychic assault on creatures near it who have been charmed in any way. Channeling a surge of wild magic to overwhelm the creatures’ senses, this often results in any number of things immediately happening.

These could be beneficial, hurtful, or just a strange occurrence. It’s impossible to predict.

A New and Invasive Species

The thing about rabbits and mushrooms is that they reproduce at incredibly fast rates.

Unknown to Dorgan, the spores released from the mushrooms on the Flaggenvyper would be quickly carried away by the wind. Most often, these would simply result in growing powerful psychedelic mushrooms (if anything happened at all).

Beyond surprising whatever unlucky creature decides to eat them, it was an ultimately harmless side effect.

But sometimes, on rare occasions when the right spores were in the right environment, this could result in the formation of a new, wild Flaggenvyper.

While the spread of these creatures was initially very slow, they began to populate exponentially.

First one… then two…

Dorgan has yet to realize what he’s done, though some groups of scholars and naturalists are already taking a keen interest.

Most hear only legends of these strange and elusive creatures, though it’s only a matter of time before they are able to be studied further.

Ultimately, this creature was just the result of some silly roleplaying and excellent improv from the DM.

I can proudly say that it’s “the homebrew from the gnome brew”!

Working together to flesh out the Flaggenvyper’s abilities and tie it into the world, I fully expect that we’ll be seeing more of these creatures in future games.

While I’ll very likely still go back and tweak the stats a bit, I’m happy with what this creature has become in my own game and wanted to share it with all of you.

Now that I’ve been able to play with the program I used to make the stat block, I’m excited to share that with you in the very near future as well! 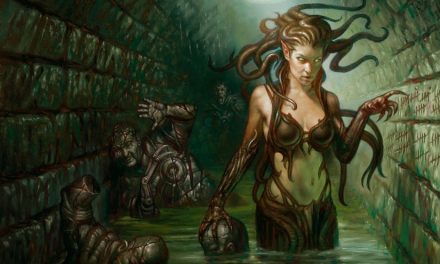 Medusa in D&D 5e | Hearts as Hard As Stone A Guide To Hags: The Wicked Witches Of D&D