5e Primal Savagery vs Shillelagh: Which Spell is Right for Your Druid? 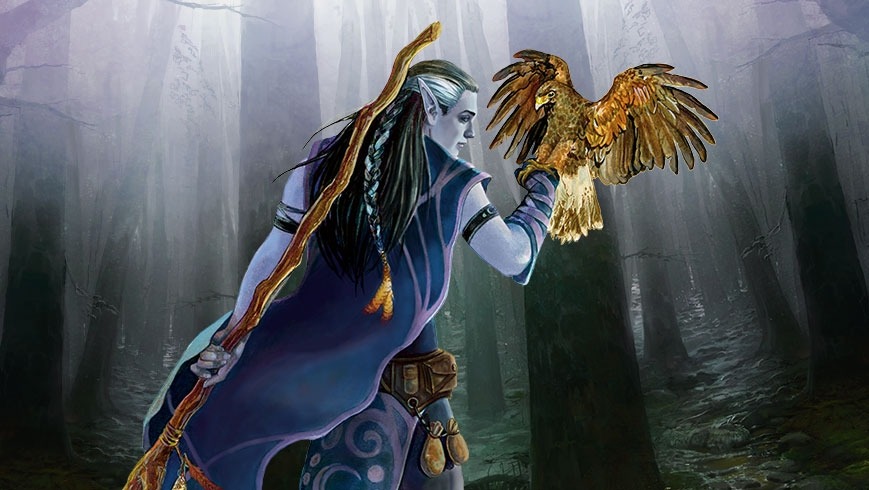 Primal Savagery and Shillelagh are two D&D spells that can be used by Druids to dish out some solid melee damage.

In this article, we’re going to compare these spells and discuss when each one should be used in order to best serve your group!

Overview of Shillelagh and Primal Savagery

On the surface, these two spells are incredibly similar.

They’re both cantrips that add some extra “oomph” to your character’s melee attacks.

But that’s largely where the similarities end.

So let’s take a quick look at both of these before we get into the comparison.

Shillelagh is an iconic Druid cantrip that is found in the 5e Player’s Handbook.

Components: V S M (Mistletoe, a shamrock leaf, and a club or quarterstaff)

The wood of a club or quarterstaff you are holding is imbued with nature’s power. For the duration, you can use your spellcasting ability instead of Strength for the attack and damage rolls of melee attacks using that weapon, and the weapon’s damage die becomes a d8. The weapon also becomes magical, if it isn’t already. The spell ends if you cast it again or if you let go of the weapon.

In other words, your Druid will be adding their Wisdom modifier to attack and damage rolls instead of their Strength.

Because Shillelagh also makes your staff count as a magical weapon, it’s very useful at low levels when an encounter with a ghost (or another enemy that resists nonmagical damage) can be incredibly deadly.

This lets you crank out more damage with your melee weapon attacks than your Druid would likely be able to do otherwise. Because this is a cantrip, you don’t have to worry about using up precious spell slots for this either!

It lasts a minute, so you should be covered for the entire combat. Each weapon attack you land will benefit from this.

Primal Savagery was introduced as a new Druid cantrip in Xanathar’s Guide to Everything.

Growing beast-like teeth or fingernails that deal some respectable acid damage to whichever creature you hit with your melee attack is pretty hardcore!

Making this attack is part of casting the spell. Whether you hit or miss with the attack roll, your nails/teeth go back to normal.

Much like with Shillelagh, Primal Savagery is a great way to throw down some extra melee attack damage.

While most Druids would need to rely on their Wild Shape ability to be useful on the front line against targets in melee range, those who take either of these spells can hold their own a bit better.

But which is better: Primal Savagery or Shillelagh?

It’s not uncommon for cantrips to grow in power as your character levels up.

Just look at other cantrips like Fire Bolt, Booming Blade, or the Warlock’s most iconic spell: Eldritch Blast.

Considering that these spells are taking your attack action, you want to make sure that whatever you use deals damage appropriate to your level.

Unfortunately, Shillelagh does not scale so well. As you level up, the only increase it gets is from your Wisdom ability score increase.

At lower levels, 1d8+WIS is a far better deal than 1d10 damage. From level 5 on, Primal Savagery is going to provide you with better damage output on average.

Not getting extra damage from Shillelagh at higher levels is pretty “meh.” At higher levels, your enemy is more likely to give you a confused look if you use your single melee attack to deal just 1d8+WIS damage to them.

So Primal Savagery scales better, but that doesn’t mean Shillelagh is useless!

Related: The Complete Guide to the Druid Class in D&D 5e

Possibly the biggest advantage that Shillelagh has on Primal Savagery is that it can be useful when taking an Attack of Opportunity.

Because you have a full minute (10 rounds of combat) before the spell ends, if you’ve already cast Shillelagh on your staff or club, you get that bonus on your opportunity attacks.

Because Primal Savagery is a melee spell attack and not just a regular melee weapon attack, you aren’t able to make opportunity attacks with it.

This might be pretty situational, but it’s nifty to have a plan for when those situations arise!

That said, there is room for some DM discretion when it comes to combing Primal Savagery with the War Caster feat. If you’re looking at the RAW, the spell’s range of “self” doesn’t meet the requirements for taking opportunity attacks with War Caster.

However, in my recent campaign, the Druid and I talked about this combination. Considering how well it fit her character, the fact that it’s no stronger than a Wizard’s Fire Bolt, and that she had taken War Caster, we decided to house rule that she could use Primal Savagery with her opportunity attacks.

It didn’t throw anything out of balance in our game and she got to play her character how she envisioned it. So it was a win all-around!

Nevertheless, you’ll want to check with your DM’s ruling on the matter first just to be sure!

While War Caster is a great feat, you’ll generally want to spend your first Ability Score Increases buffing up your Wisdom as a Druid since that’s what powers most of your abilities.

Shillelagh can be devastating if you are multiclassing. Combining this buff with the extra attack feature that you gain access to for hitting level 5 in a martial class like the Monk, Fighter, Ranger, or Paladin is excellent.

Especially as a Monk who can use their Flurry of Blows ability to unleash even more attacks, you can find yourself getting extra use out of the Shillelagh spell.

Monks are proficient with the quarterstaff and club as Monk weapons, so it’s not a bad idea to use this instead of an unarmed strike. Well, until you hit the higher levels where they do the same damage anyway. But it still looks cool!

Because Primal Savagery is a spell attack and not a melee attack, you wouldn’t benefit from it in this way if you’re multiclassing with a class that gives you multiple attacks.

When Should You Take Shillelagh

There are a few situations where you should absolutely take the Shillelagh spell.

Once you hit 5th level, it won’t deal quite as much damage as Primal Savagery. While it’s a great spell up until that point, it won’t serve you quite as well (excepting those few situations we mentioned earlier) beyond that.

Building Around Your Melee Weapon and Melee Attack

Picking up the Shillelagh spell can really tie a build together. If your Druid is focusing heavily on smacking enemies, this is a must-have.

Some Druid circles, like the Circle of Spores, are strongly geared towards this kind of approach. Your abilities are all geared towards making yourself a more formidable melee attacker.

Shillelagh plays very well with these abilities and you’ll get some awesome synergy.

On a similar note, this is a good spell for a ton of Druid multiclassing options. Martial classes will give you the Extra Attack feature which will help you make full use of Shillelagh’s bonus to your attack roll while also dealing more damage.

If you’re able to pick up a powerful weapon (like a Staff of Withering), it’s actually almost disgusting how quickly you’ll be able to chew through enemy hit points.

It might take you a round to really get going (remember: Shillelagh takes your Bonus Action to cast), but you don’t need to worry about concentration. You’ll be set to bring the pain throughout the entire combat!

When Should You Take Primal Savagery

Pretty much any other time than what I mentioned above, you’ll want to take Primal Savagery.

The fact that it scales so well really tilts things in its favor. Once you hit level 5, it’s able to keep pace with other spells like Eldritch Blast or Fire Bolt pretty well in terms of damage.

Whereas Shillelagh is pretty situational unless you’re building around it, Primal Savagery is just a solid cantrip to have at the ready.

Unless you KNOW that you’re going to be fighting something that resists acid damage, it’s the clear winner in most cases.

Which spell you choose depends on how often you see yourself being in melee range and how much you are willing to build your character towards melee combat instead of using larger spells and the Druid’s Wild Shape ability.

At the end of the day, it all comes down to what spells work best for your playstyle.

If this is a question that is keeping you up at night, don’t worry! Let me know if I can answer any questions or help with anything else here!

You might also like this article I wrote in defense of the most ridiculed spell in all of D&D 5e!