The Best Spells for Eldritch Knight Fighters in D&D 5e 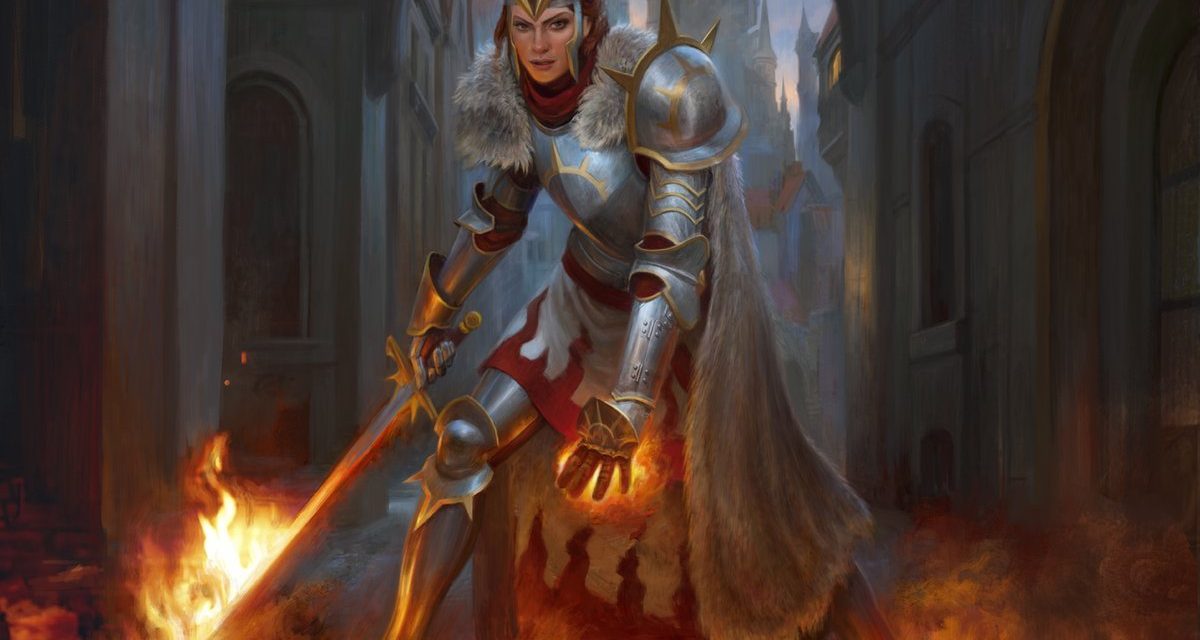 Eldritch Knights are a popular and powerful Fighter subclass in D&D 5e.

These warriors expertly combine swordplay and magical prowess to become one of the most formidable martial classes.

However, there are a ton of spell options to consider. It can get a bit overwhelming.

In this article, we’ll be exploring the best spells for Eldritch Knight Fighters to help you find the perfect mix of magic and steel for your character!

Before we get into the spells themselves, let’s take a moment and look at what makes for ideal spells for Eldritch Knights.

You want to choose spells that have a clear and direct impact on your play style and your character’s role in the party. Because you have a much smaller number of spells that you can learn and use compared to full-time spellcasters, you need to be selective.

Also, keep in mind that Eldritch Knights have to juggle a few different key ability scores.

Because you’re also having to invest heavily into your Strength or Dexterity (depending on your build) and Constitution, your Intelligence isn’t necessarily going to be the same as a Wizard, for example.

Because Intelligence determines your spell attack modifier and your spell save DC, those are also going to be a bit lower.

This means that spells that don’t require enemies to make a saving throw are much more valuable to you. Likewise, there’s a bit more risk when casting spells that require you to make a spell attack roll.

If you haven’t already checked out my full guide to the Eldritch Knight Fighter, I’d recommend doing so. That will give you a better look at the subclass’s features as you look for synergies and opportunities for your own Eldritch Knight!

But with all of that said, let’s get into it!

There are some real standout cantrip options available to you. We’ll start with the “bread and butter” options and then include a couple of other options worth considering.

This bad boy deals some very solid extra damage and works perfectly alongside the Eldritch Knight’s War Magic feature at level 7. Not to cheapen the experience, it also scales as you level up which means it is a staple pick for the subclass!

In fact, everything we love about Booming Blade also applies to another excellent cantrip: Green Flame Blade.

With Green Flame Blade, you’re able to spread the punishment out to another enemy next to the one you just smacked.

Depending on your character, it may or may not be worth it to grab both of these. (Remember: you’ve only got 2 cantrips until you hit level 10! Choose wisely!)

Beyond the two “blade” cantrips, we absolutely have to also include Mind Sliver here.

This is a slight exception to the considerations that we discussed earlier in this article. While it does require the enemy to make a saving throw, it’s fairly rare for enemies to be proficient in Intelligence saves.

Because an enemy that fails their save against this is subtracting 1d4 from their next saving throw before the end of your next turn, it can make for an excellent combo!

As for the next pick, it feels wrong to not include the ever-reliable Mage Hand on this list. If you want to give yourself an option with plenty of practical utility to offer, this is what you want.

If you want a ranged spell attack option, go with the classic Fire Bolt. But if you’re built around Dexterity, you’ll generally be better off with a bow.

Moving on, now we’re looking at the best first-level spells for Eldritch Knights.

You have two VERY impactful defensive options at this spell level: Shield and Absorb Elements. I’d recommend taking both of these for different reasons.

Shield is a very nice +5 boost to your Armor Class which can greatly help you avoid becoming a puddle of goo on the end of an ogre’s club. Against enemies who are trying to get around your armor class, it’s a lifesaver!

On the other hand, Absorb Elements is used to gain resistance to a specific type of damage as you’re taking it.

Not only are you only taking half damage, but you’ll get extra damage of that same type added to your next melee attack. This makes it great for shrugging off an enemy’s Fireball and then promptly giving them a taste of their own medicine!

Both of those options are excellent defensive spells to have ready. They’re absolutely worth the spell slot and reaction!

Though we can’t ignore the classic damage-dealing option!

For times when you absolutely need an attack to hit, Magic Missile is fantastic. It’s decent damage considering that it’s a guaranteed hit which makes it perfect for finishing off an enemy before they make a getaway.

Though also having a range of 120 feet means that they’ll have to work extra hard if they want to escape anyway!

Abjuration magic definitely gives us some good options, but you might want to consider learning a trick from the school of illusion magic as well.

Both Blur and Mirror Image are excellent defensive spells that are sure to leave your enemies endlessly frustrated. Considering that you can choose a spell from outside the schools of Evocation and Abjuration for the spell you gain at level 8, each of these is a perfect candidate.

Overall, Blur has a generally better (and easy to keep track of) effect: attacks against you are made with disadvantage. However, it does have a concentration requirement which means that you could potentially lose it completely if the attack still manages to hit.

Meanwhile, Mirror Image gives you a few illusory duplicates of yourself who exist until they take damage. There’s no concentration requirement here, though you could potentially end up losing all of the duplicates in a single round if you’re getting attacked too much.

I’m personally more partial to Blur, but either of those options is an excellent choice.

Of course, you could instead take another offensive spell instead.

Shadow Blade comes to us from the school of illusion as well. This spell plays wonderfully with the Eldritch Knight’s action economy and can make a huge impact!

Using a bonus action to summon the blade, it deals 2d8 psychic damage on a hit. Not to mention, you also get advantage on your attacks when your target is in dim light or darkness with this!

If you’re looking for a good offensive option from the school of evocation, why not pick Shatter?

This spell is insanely loud which, depending on your character, might be a good or bad thing. However, it’s a solid AoE option with some great damage and the ability to especially punish creatures made of inorganic material.

While enemies will be making Constitution saves against Shatter’s effect, you can still get excellent use out of this if you position it well.

The immediate top pick for level 3 spells is easily Haste. This spell is one of the best buffs in the game, especially at this level!

Of course, you’re also able to take options like Counterspell or Dispel Magic at this level.

Both of these are very handy to have. Counterspell can interrupt an enemy caster while Dispel Magic is great for getting rid of lingering magical effects.

Where things get a bit dicey with these spells is their reliance on your spellcasting ability (Intelligence) when dealing with spells above level 3. However, I’d still say it’s worth a try in those moments that you need it.

That said, I’d recommend only taking one of those options and not both. I lean towards Counterspell because it’s more useful in combat, but Dispel Magic is handy for getting around out-of-combat challenges like magical traps.

There’s a reason Fireball is the classic spell that it is. Excellent damage in a large radius with a huge casting range is pretty hard to beat.

Even by the time you’re getting access to level 3 spells at level 13, 8d6 fire damage in a 20-foot radius hits HARD.

Enemies who make their save will still be taking half damage. If you’re getting swarmed by weaker enemies, this could still be enough to deal with them entirely.

But you know what they say: when all else fails, throw a fireball!

Eldritch Knight Fighters peak spellcasting is with level 4 spells. You get a single level 4 spell slot per day once you hit level 19, so use it wisely!

Fire Shield is an excellent candidate for your best level 4 spell.

It’s both dependable and versatile. Combined with a 10-minute duration, you can get a fair amount of use out of a single casting!

However, there is another spell that stands out at this level…

Whether you need to put an enemy in timeout or take cover in your own impenetrable hamster ball, Otiluke’s Resilient Sphere has you covered!

Nothing gets in or out of the sphere (attacks, spells, effects, etc) and the sphere is immune to all damage. Only a Disintegrate spell can burst your bubble!

This is yet another reliable and versatile spell that is absolutely worth considering!

Though I feel the need to include one honorable mention…

Storm Sphere is a fun spell that can give you some very nice battlefield control. It slows enemy movement while also pelting them with bludgeoning damage.

Most importantly, you can use your bonus action to make ranged spell attacks with lightning bursting out from the sphere’s center.

It’s definitely an exciting spell, though I don’t know how well it compares to the previous options we covered.

The bludgeoning damage doesn’t count for much in the highest levels of play when you’re getting this. The 4d6 lightning damage is still handy, but you can quickly find yourself tying up your bonus action by trying to use it.

This creates some conflict with your other features (especially Improved War Magic) which are also trying to claim your bonus action.

But on the other hand, it’s too cool not to mention and could still be an effective part of your overall strategy.

As a versatile magical warrior, the Eldritch Knight fighter can be a powerful force on the battlefield. With their unique blend of martial and arcane proficiency, there are several spells out there that complement the class perfectly.

Whether you’re looking for defensive buffs, powerful offensive magics, or anything in between, I hope this article has helped you find the perfect selection of spells for your Eldritch Knight character.

Are there other spells that you would add to this list? Let’s chat in the comments below! The Complete Guide to the Rogue Class in D&D 5e