Ray of Enfeeblement in D&D 5e | How It Works 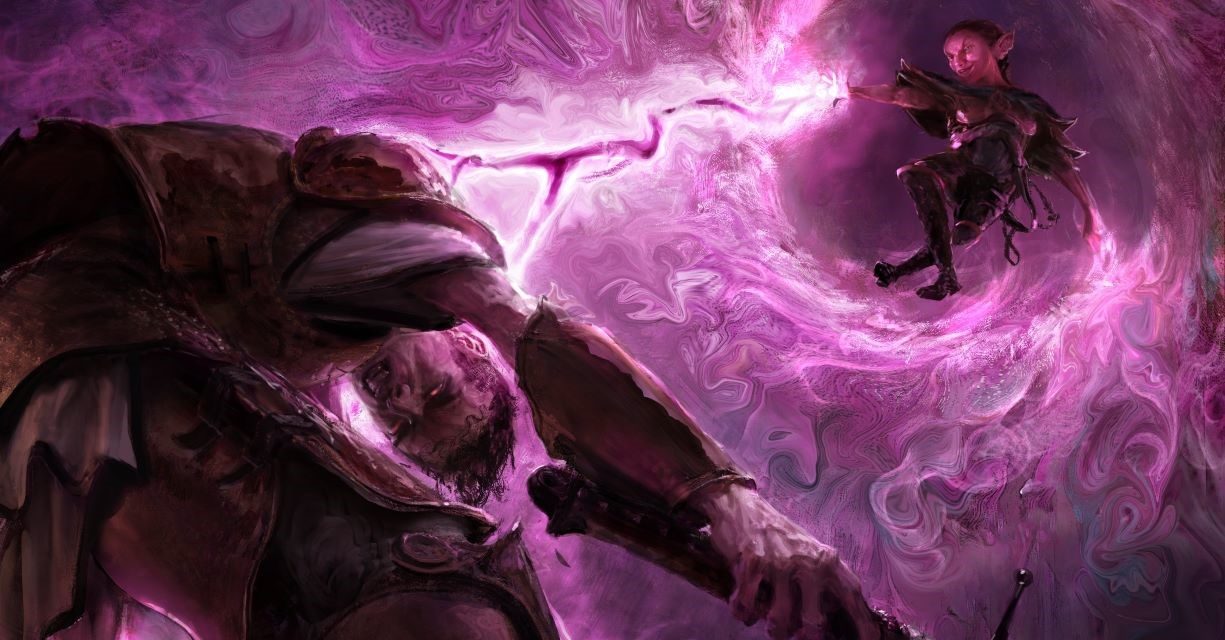 Want to give your adversaries noodle arms? Does reducing an enemy Ogre’s crushing strikes to little slaps sound fun?

Ray of Enfeeblement can help you accomplish just that!

This iconic spell has appeared in every edition of the game starting with 1st edition AD&D. For the purposes of this spell guide we will be explaining the 5e D&D version of this spell only.

Let’s get started and look under the hood of this classic spell and see what all the fuss is about.

What is Ray of Enfeeblement?

Ray of Enfeeblement is a necromantic ranged attack spell that can reduce the amount of damage a Strength-based weapon attack is capable of doling out. It requires concentration, is considered a debuff, and requires a Constitution saving throw to overcome.

We’ve provided the official spell description from the 5e Player’s Handbook below for reference purposes.

A black beam of enervating energy springs from your finger toward a creature within range. Make a ranged spell attack against the target. On a hit, the target deals only half damage with weapon attacks that use Strength until the spell ends.

At the end of each of the target’s turns, it can make a Constitution saving throw against the spell. On a success, the spell ends.

What Does Ray of Enfeeblement Do in D&D 5e?

Ray of Enfeeblement is a Necromantic ranged spell attack that, if successful, decreases the target’s damage from Strength-based weapon attacks by half (50%).

At the end of each of the target’s turns, it makes a Constitution saving throw; on a success, the spell ends. Otherwise, Ray of Enfeeblement lasts for up to one minute but requires Concentration.

Even if this ranged spell attack is successful and the target fails it’s saving throw, Ray of Enfeeblement does not cause damage as it did in earlier editions of Dungeons and Dragons. The 5e version of the spell is considered a Debuff.

Related: The Schools of Magic in D&D 5e

Who Can Cast Ray of Enfeeblement?

Ray of Enfeeblement is a 2nd level spell that is found on both the Warlock and Wizard spell lists.

It is also accessible to Clerics of both the Death Domain and Grave Domain.

Here are a couple of tips to keep in mind when using Ray of Enfeeblement in your 5e game!

1. Be sure to take advantage of the fact that there is no resistance to RoE.

While Ray of Enfeeblement is a relatively underwhelming and restricted debuff, it does have one advantage: no one is immune to its effects. It’s just an attack roll that, if successful, results in a spell-specific damage-reducing condition.

Every other condition, on the other hand, includes numerous monsters that are entirely unaffected by its effects.

It should be mentioned though that, as enticing as this sounds, many creatures do not use Strength-based weapons.

2. Prioritize targets with the Multiattack action.

This tip is pretty straightforward: targeting creatures with the Multiattack Action can greatly increase the effectiveness of this spell.

Ray of Enfeeblement has a very high chance of being nullified pretty quickly as it allows the targeted creature to make a Constitution saving throw at the end of its turn. This means that you’ll get at least one round of reduced damage from a target.

Why not ensure maximum effectiveness by reducing the damage of multiple attacks?

Think of it as the best ROI (return on investment for the spell slot) one can achieve with this spell.

Many creatures and enemies the PCs will encounter have access to Ray of Enfeeblement. Following the tips provided above for players can also be applied to NPCs that the DM is controlling.

One tip I would like to add is that creatures with this spellcasting ability usually have above-average Intelligence and/or Wisdom scores.

Both Wisdom and Intelligence should allow for an NPC to know to target the biggest threats that are also vulnerable to having their Strength-based attacks halved. Naturally, they would prefer to cast this against the Barbarian that’s swinging a great axe in their face instead of the Sorcerer that’s lobbing spells from the party’s backline.

NPCs should also be smart enough to target characters that also have more than one attack a round.

Is Ray of Enfeeblement a Good Spell?

You’ll get some mixed reactions on this spell. Many will say it’s a bad spell, especially compared to other 2nd-level spells both Warlocks and Wizards have access to.

The main complaint is that this spell requires a successful ranged spell attack PLUS the target failing the required Constitution-based saving throw if you hope to affect enemies for more than a single turn.

Also, consider that Ray of Enfeeblement does not affect most ranged attacks as they are Dexterity-based. Compound that with some targets using Finesse Weapons and it becomes noticeably less effective.

Keep in mind that if you miss the ranged spell attack as a part of casting this spell, you wasted a 2nd-level spell slot which is pretty valuable at lower levels. Also, many creatures in 5e D&D with good Strength scores also have high Constitution saves.

I think this complaint is completely justified criticism as it can lead to frustration over a spell that is often times highly ineffective.

However, many on the other side of the fence say it’s useful spell. The claim here being that the ability to half damage is always a boon, especially when facing higher level adversaries who might have multiattack.

However, if the ranged spell attack roll hits it is still useful and will reduce damage for at least a round. It’s important to note the Constitution saving throw comes at the END of a target’s turn.

Overall, Ray of Enfeeblement is an overrated though not useless spell, especially at 2nd level.

It’s definitely risky and can be lifesaving in certain situations, but those moments tend to be rare. Realistically, Wizards, Warlocks, and Clerics with access to this spell have many more valuable 2nd-level spells that they can choose instead.

As we’re winding down, I wanted to take a moment and address some of the most common questions that people ask about Ray of Enfeeblement.

If you have a question that hasn’t been covered in this article, feel free to ask it in the comments!

Does Ray of Enfeeblement Stack with Multiple Instances of Itself?

No. Ray of Enfeeblement is bound by the rules found in the 5e Player’s Handbook. The PHB states, “the effects of the same spell cast multiple times don’t combine”.

Meaning a creature targeted, hit, and under the effects of RoE can only be affected by one instance of the spell.

Does Ray of Enfeeblement Stack With Other Effects That Reduce Strength-Based Weapon Damage?

Yes. Any ability or spell that creates a resistance to physical damage will also come into play.

For example, a Barbarian’s Rage feature reduces incoming damage by half. This means the Barbarian in this example would take quartered damage (1/4) if attacked by a target that is also affected by Ray of Enfeeblement.

So a raging Barbarian that is hit for 8 points of damage would half the damage to 4 (from RoE) and then half that damage again (from Rage) for a total of 2 points of damage.

The attacker won’t take psychic damage, but feel free to laugh at them anyway!

Does Ray of Enfeeblement Only Work on Weapon Attacks?

Yes. Ray of Enfeeblement does not affect non-weapon attacks even if they are Strength-based.

However, most bite or claw attacks are considered Strength-based melee weapons in the Monster Manual and other sourcebooks. (So using this on something like a Dire Wolf or an Owlbear would still be useful!)

Does Ray of Enfeeblement Cut Bonus Damage in Half?

Yes. There are many spells, effects, and abilities that give an individual bonus damage on top of their strength-based weapon attacks.

Some examples would be a Warlock’s Hex, a Ranger’s Hunter’s Mark, and a Rogue’s Sneak Attack feature.

In these cases, this bonus damage would also be halved.

According to the Player’s Handbook (pg. 196), extra damage dice are regarded as part of the same damage roll. Ray of Enfeeblement reduces the overall damage of an attack by half if it is triggered by a Strength-based weapon hitting a target.

As mentioned, Ray of Enfeeblement admittedly leaves a bit to be desired. Like many, I tend to agree that this is an overrated spell, especially at 2nd level.

However, making a blanket statement also does not mean that it’s not an effective spell in certain scenarios. It most certainly can be effective and at times even give a party the extra edge they need to defeat their enemies in combat.

Even if it’s only applying for one round, that can make all the difference!

That being said we’d love to read your opinion on this classic spell in the comments below. How might you homebrew it to make it more generally effective?

As always we thank you for taking the time to read this guide and supporting the Tabletop Joab website. D&D Storytime: That Time My Halfling Rogue Freed A Bunch of Genies Circle Of The Moon Druid Guide: Let’s Get Wild (Shape)