The Flameskull in D&D 5e | Every Adventurer’s Nightmare 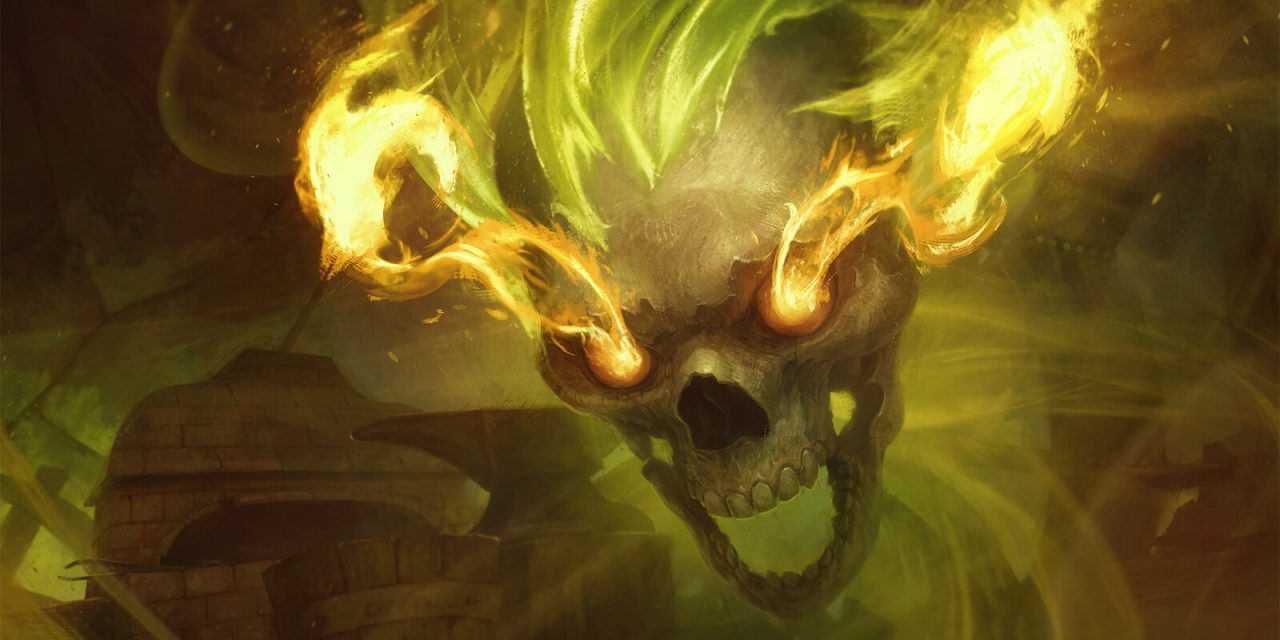 The Flameskull is one of those monsters that adds an almost unspeakable level of tension at any table. A DM needs to only describe the flickering green glow coming from around the corner to make even the most battle-hardened D&D veteran start to sweat!

It’s easy to write these creatures off. After all, they’re just a floating skull that’s on fire, right?

Before you know it, your entire party can be incinerated.

Flameskulls are wickedly powerful and, for those who know, have become infamously legendary in their own right.

If you’ve got any potions or gear that give you fire resistance, it’s not a bad idea to get it out now! Today we’re going to face our fears and see what makes the Flameskull tick.

What Are Flameskulls in D&D 5e?

For wizards who happen to meet their untimely end in the presence of evil necromancers, liches, or dark clerics, death is not the end.

Conducting foul rituals, these corrupt spellcasters use the fallen wizard’s remains to create the ghastly flameskull. As the ritual comes to its end, green flames illuminate the skull which animates and serves as a powerful sentry for its creator.

These creatures are commonly used for guarding treasure, secret entrances, or other important things. A flameskull might have some vague memories or personality traits of their former self, but they now exist only to serve their creator’s dark bidding.

Whatever commands the flameskull’s creator gave it upon its creation are followed exactly. With such great care given to the flameskull’s instructions, it’s virtually impossible to reason with these beings.

I’m not saying you can’t try, but there’s a much higher chance of your character being reduced to a pile of ash than succeeding!

Because flameskulls do have the ability to speak Common, it’s possible that they might also call out threats to further scare you away or call for assistance from other enemies in the area.

Encountering a flameskull is a terrifying thing for any adventure. Not only are they formidable casters, but they can easily set off further traps or alarms as they fulfill their guard duties for their master.

Flameskulls in D&D 5e are immune to cold, fire, and poison damage which renders those useless. They also resist lightning, necrotic, or piercing damage, which means they’ll only be taking half damage from those attacks.

If you think you can charm, frighten, poison, or paralyze one of these bad boys, you’ll quickly learn that they’re immune to those conditions as well. Oh, and you can’t knock them prone either on account of the whole “floating head” thing.

The arcane knowledge possessed by the flameskull in life carries through into this new form. They are powerful “blaster” type spellcasters who don’t require somatic or material components for their spells.

Their spells include options like fireball and flaming sphere that can be nothing short of an execution in the right environment.

Even beyond the flameskull’s spells, it’s able to make two attacks per round with its Fire Rays. Blasting at the party with its eye beams, each of these Fire Rays hits for 3d6 damage which isn’t a small amount!

As a CR 4 monster, the flameskull is almost certainly going to be the most terrifying enemy that a party faces at that level. Its abilities are so far beyond that of just about anything else the party will have reasonably faced up to this point.

Honestly, counting a flameskull as a CR 4 monster is a quick way to result in a TPK. This is especially true if the DM is playing it tactically! (Which we’ll cover shortly…)

The flameskull may have a low AC and relatively small pool of hit points, but its abilities and immunities/resistances make it the stuff of nightmares. I’ve run games where a party of level 8 characters nearly found themselves getting wiped by one of these things!

The party might beat the flameskull once only to find themselves doing some backtracking in the dungeon and come to face to face with their old friend once again.

Ok, so I need you to take a deep breath now!

The good news is that flameskulls can be permanently defeated. Splashing holy water on the flameskull’s remains will prevent it from reforming. Additionally, casting dispel magic or remove curse on them will remove the effects of the ritual that created them in the first place!

If you find yourself without those options, you’re going to have to fight the flameskull the old-fashioned way.

Piercing damage won’t get you very far here because of the flameskull’s resistance, but slashing and bludgeoning damage will work nicely!

As for spells, avoid using those that the flameskull has resistance or immunity to. If you have spells that deal psychic or force damage, for example, you won’t be fighting such an uphill battle since they’ll be dealing full damage.

You’ll want to take note of the environment. The biggest trick to defeating a flameskull is to hit it fast and hard.

These guardians are great examples of what it means to be a “glass cannon.” They can’t take a hit so well, but they can sure dish it out!

If the flameskull is able to fly out of reach, you’re going to have a very bad time. A single fireball can potentially wipe the party as it is. Even if it drops or weakens some of the party, staying out of reach and raining down Fire Rays from its eyes can make this fight very one-sided very quickly.

If you aren’t able to bum-rush the flameskull, at least try to bait it into a room where it doesn’t have as much movement space. Setting your melee combatants up to hit it with bludgeoning or slashing damage, can potentially make it go down very quickly.

If all of that fails, the party needs to do whatever it takes to keep their ranged allies (archers and spellcasters) up. The flameskull is likely resisting whatever is being thrown at it, so this becomes a bit of a war of attrition. It may not be pretty, but you’ll survive if you can manage!

Oh, and, don’t forget to splash that holy water on the remains unless you’re ready for round 2.

Running Flameskulls as a DM

Spells like fireball and magic missile mean that these undead are powerful blasters. With shield and blur, they can also play some defense if necessary.

A flameskull can use its flying speed to navigate safely away from the party’s melee fighters while blasting down the party’s ranged combatants.

If the party is grouped together, they’re practically begging to have a fireball thrown at them.

In most encounters, the flameskull will be looking to drop/weaken as many party members as possible with a fireball then melt the rest down with its Fire Rays. Magic Missile is good for dealing with characters that have high AC since it automatically hits.

With an intelligence score of 16, the flameskull should absolutely be using every tactical advantage it can get. Since they speak Common, feel free to have the flameskull mock, taunt, and threaten the party just to really get them fired up.

If there’s a Wizard or some other spellcaster in the party that might try to counterspell the flameskull’s fireball, it might try to bait the caster into using counterspell on something lesser like flaming sphere or magic missile.

Fireball is the flameskull’s heaviest hitter and it only gets it once. It’s smart enough to know how to make that spell slot count.

Remember: the flameskull is charged with defending this location and will absolutely make sure to fulfill its duty.

Being the “glass cannon” that it is, it wants to deal with the pesky intruders as quickly and efficiently as possible. A drawn-out fight only makes things harder for the flameskull.

If the party doesn’t remember to fully deal with the flameskull with holy water or by removing its curse, you should absolutely make them regret that if they come back through an hour later. Just make a little note and try not to chuckle while they are celebrating their supposed victory.

I mean, it’s a skull that’s glowing with green flame and fueled on pure evil magic. It’s not exactly looking to be anyone’s friend!

A Thought: Flameskulls in an XP Leveling Game

Some enterprising players might look at the flameskull’s ability to reform after an hour and see opportunity instead of pure terror.

If you use XP to level up in your games instead of milestones, could it be possible to just sit there and farm XP from a flameskull?

Personally, I’d say no. To be honest, I’d honestly even be tempted to take it a step further just to really add to the terror and frustration of such an encounter.

A flameskull isn’t fully defeated until it can no longer reform. At that point, the party would gain XP from the encounter.

If they encounter it three more times in the dungeon before they finally remember to douse it with holy water, they only gain the XP as if they had fought and beat it once.

If they don’t do this, it might even be tempting to rule that the reward is them being able to escape with their lives. Maybe split the difference and reward half of the XP if it’s not fully defeated.

That might be cruel, but I think it ultimately falls to what the DM’s definition of “defeat” is.

I’m curious to hear your thoughts about that in the comments!

There’s a reason that veteran D&D players find it nearly impossible to hide their nervousness when the DM describes an ominous green flame around the corner. Flameskulls are one of the most wickedly terrifying monsters that low-mid level parties could face!

Personally, I’m hesitant to include a flameskull in a dungeon unless the party is at least level 7 or 8.

These baddies hit WAY above their CR rating. I’d say they are the most commonly-cited reason why the Challenge Rating system in 5e isn’t exactly always the best measurement for planning encounters in your game!

Have a flameskull encounter in your game you want to share? I’d love to read it in the comments!

Want to stay up to date with all of my latest articles? Sign up for my newsletter below!

Looking to take combats in your D&D 5e game to the next level? Pick up your copy of The Monsters Know What They’re Doing to give your players a REAL challenge! The Monsters Know What They're Doing: Combat Tactics for Dungeon Masters
$21.49
Buy Now on Amazon! Read the Review!
We earn a commission if you make a purchase, at no additional cost to you. 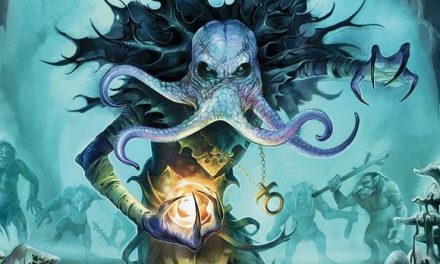 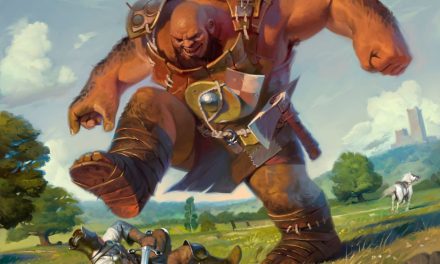