With so many powerful and interesting spells to choose from on the Druid’s spell list, the question must be asked: “What are the best Druid spells?”

There are so many ways to rank the Druid’s spells, but I thought that it would be interesting to choose the single best Druid spells by level.

It’s no easy feat and there was certainly some very close competition at each level. When factoring in how you choose to build your Druid, there may be some difference.

However, taking the core strengths and role of the Druid class in general, these are my picks for the best Druid spells by level in D&D 5e.

The Druid isn’t hurting for useful cantrips, but Guidance takes the top spot.

When one of your party members are making an ability check, being able to add an extra d4 to their roll can easily be the deciding factor in their success.

Unless you are concentrating on another spell effect, there is absolutely no downside to using Guidance and it should quickly become habit to throw it on your party members before they attempt an ability check.

As expected, choosing the single best Druid spell of the Level 1 options was very difficult. The class has several standout options at this early level, but only one could take first place.

With great choices for control spells, healing spells, and some awesome utility spells, this was a head-scratcher. But every Druid I’ve ever played always keeps this one spell on their list no matter what.

Faerie Fire carries incredibly well and can easily find use for your entire adventuring career. Not only is it a great way to combat invisible enemies, but giving advantage to all attacks against the affected creatures is a game-changer.

For level 2 spells, the top pick is Spike Growth.

Druids are fantastic for controlling large areas of the map with spells that outright deny movement or make them a less-than-ideal option. Spike Growth does this to devastating effect!

This spell covers a 20-foot radius which is more than ample space to rip enemies apart. When passing through the area, a creature takes 2d4 damage for every 5 feet that it moves. This can add up really quick!

But this damage isn’t restricted to the creatures’ movement on their turn. This damage is done specifically for every 5 feet that the creature travels. Using Spike Growth in combination with spells like Grasping Vine or other abilities that force creatures to move can be downright disgusting.

The Druid’s Level 3 spell options offer a lot of cool utility effects, but most of these options are pretty situational. But Conjure Animals is a very powerful spell option that is sure to turn the tides of combat and probably frustrate your DM to no end.

This was a tough call between Conjure Animals or Erupting Earth, but it’s impossible to overstate the benefits of summoning creatures to help you.

Your animals will help put out more damage against your enemies while also helping to soak up damage that the enemy is putting out.

Of course, because these creatures last for 1 hour, you may also find some interesting utility for them as well.

When my group was running the Rappan Athuk adventure from Frog God Games, the apes that my Druid had conjured in combat also proved very useful for breaking down several doors that were giving us all a strange amount of trouble! It wasn’t the quietest way, but it worked!

While there are plenty of great level 4 spells available to Druids, this one was a no-brainer.

Polymorph is such an incredibly useful spell. Honestly, who wouldn’t want to turn into a Tyrannosaurus Rex and go crazy? Sure there are other beasts that you can turn yourself or an ally into, but let’s be honest here…

Of course, you can also use this spell defensively if you need to! Turning one of the Hill Giants that’s trying to crush you into something like a harmless turtle is a quick way to even the playing field!

This is one of those spells that any Druid will want to take and never get rid of!

Maelstrom from Xanathar’s Guide to Everything comes in as the champ for the Level 5 Druid spell options.

It was a tough call between this and Greater Restoration (because every party should have this at the ready), but I’m a sucker for huge AoE spells.

With a crazy range of 120 feet and a 30-foot radius for the spell’s effect, the Druid can unload on a group of enemies before they even get a chance to close the distance. Not only is the area difficult terrain (which slows the enemies’ movement), but it deals solid damage and pulls them towards the center if they fail their Strength saving throw.

You can get absolutely dastardly with this spell. Just trap the enemies in the maelstrom and fire at them from a safe distance!

The Heal spell has to take the honors of being the best Druid spell at level 6.

Its effect is simple but very useful. A creature within 60 feet of you regains 70 hit points and is cured of any blindness, deafness, or diseases that are affecting it.

Being able to heal a large chunk of hit points from a safe distance is very potent. Many times, a character may get back up from being knocked down to 0 hit points only to get knocked back down on the enemy’s next turn. With the Heal spell, your ally is back in the fight at (or very near) tip-top shape!

We are now in the levels where the biggest spells become available. These are powerful, but incredibly limited which means that your choice matters even more for spells at this level!

For Level 7, the title of Best Druid Spell goes to Plane Shift!

When your higher level resources are limited, having a spell that can be either offensive or defensive is great. In the case of Plane Shift, you can either yeet an enemy to some other plane of existence or use this as a quick escape option.

If you’re using this on an enemy, you have to make a successful melee spell attack against them. If you hit, the creature makes a Charisma saving throw. If they fail this save, you send them to a random location of whatever plane your tuning rod is attuned to.

The enemy may find their way back eventually, but it almost certainly be a very long time before that happens.

Alternatively, you can use this spell to get yourself and up to eight willing buddies to a different plane. Once again, you must have a tuning rod that is set to the plane you are wanting to go to. But this can be invaluable if your party finds themselves needing to get away quickly.

There’s something extra satisfying about casting Feeblemind on a particularly fearsome enemy. One moment, they’re trash-talking and barking orders to their group, but the in the next moment they are staring blankly ahead and drooling on themselves.

This spell’s 4d6 damage is “meh,” but that’s not why you’re using it. The real joy comes in reducing the target’s Intelligence and Charisma scores to 1.

A creature afflicted with Feeblemind can’t cast spells, communicate, or understand language. They have some very basic instincts, but that’s pretty much it.

Oh, and this lasts for 30 days unless it’s cured with Greater Restoration, Heal, or Wish.

Finally, we have the biggest of the big spells at Level 9!

I very nearly gave this one to Foresight, but I just can’t deny the sheer wonder that is Shapechange.

As a Druid, you are not unfamiliar with changing your form by this point in the game.

But the wording here is what counts the most. It’s not just any beast as you have probably gotten used to. This spell lets you turn into any creature!

The only limitation here is that you cannot turn into a construct or Undead creature.

Did you party once have an encounter with something epic like a Purple Worm or a Beholder?

Well congratulations, dear Druid! You now get the privilege of playing as these creatures (or whatever else you may choose) for the next hour!

Not only is this spell unbelievably useful, but it’s possibly the most fun of all of the Druid’s spells.

Either Foresight or Shapechange have to take the top honor, but Shapechange has some of the most incredible potential for stories that your group will never forget!

So there you have it, my picks for the Best Druid Spells of each spell level.

Some of these were considerably more difficult to narrow down to just one pick than I expected going in.

Naturally, some of these may vary depending on your party and particularly flavor of Druid. But every time I’ve played a Druid, I just can’t resist keeping these at the ready!

Do you agree with these picks? Is there a different spell that you think deserves a permanent spot on every Druid’s spell list? 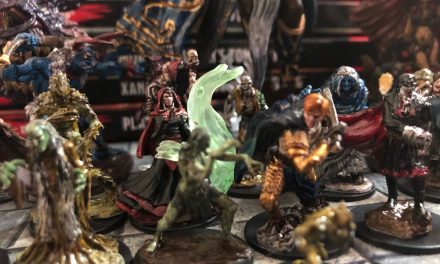 How To Paint Miniatures (Even If You Have No Clue!)