When it comes to damage-dealing perils in D&D 5e, we can’t forget that gravity has the potential to be the most terrifying of all!

Whether it’s devious pit traps, unstable bridges, or creatures like harpies that are fond of tossing adventurers off of mountaintops, few things can lead to rolling a new character as quickly as falling damage!

But how does falling damage in D&D 5e work?

In this article, we’re going to cover everything you need to know to properly calculate falling damage. We’ll also go over ways to protect yourself if your character takes a sudden fall as well as some additional options for using fall damage in your 5e game!

We’ll first look at how falling works in 5e if you’re following the Rules As Written (RAW). Later, we’ll go over some additional options that you can incorporate into your own game.

Falling damage in D&D 5e is calculated as 1d6 damage for every 10 feet that the creature falls. So a 70-foot fall, for example, would deal 7d6 damage.

After falling, a creature lands prone unless they have immunity to the fall damage.

The maximum falling damage is 20d6 damage or 120 points of damage. If you’re following the Rules as Written (RAW), this means that damage caps out with a 200-foot fall. A fall that’s greater than 200 feet will still only deal 20d6.

In the case of things like resistances, falling damage is considered bludgeoning damage. If a character takes a nasty fall onto something like spikes or razor wire, you might add piercing or slashing damage on top as appropriate.

How Far Can You Fall Without Taking Damage?

Not every fall in 5e warrants rolling damage!

A character can fall up to 10 feet without taking damage since the damage is dealt for every 10 feet they fall. Adventurers are hardy enough that a 5-foot fall isn’t going to be an issue.

For a 10-foot fall that the character is expecting (like jumping out of a tree), I personally have the player make a Dexterity (Acrobatics) check with a low DC (like 10 or 12).

If they make the DC, they can safely land without taking damage. Otherwise, they don’t stick the landing and take 1d6 damage.

How fast do you fall?

Generally speaking, falling in 5e is assumed to be instant.

If it’s something like a 100-foot fall or so, that makes sense. With that said, a larger fall is an opportunity to really dial up the drama and tension at the table!

The rate of falling per Xanathar’s Guide to Everything is 500 feet per round or 83.3 feet per second.

However, D&D boss Chris Perkins suggests 580 feet per round in this Twitter thread or 96.7 feet per second.

If a character takes a 500 foot or more fall, give the party that round to react. The party’s Bard may have a spell that can save their friend’s life or the Monk might just be fast enough to try to catch them!

As for the one currently falling, if they don’t have a way to catch themselves they can at least use their full turn to scream, right?

I’m no physicist, but I’m sure there’s probably some difference between falling in D&D and falling in real life.

You’re free to play with the rate of falling if you’re so inclined, but (as we covered in my article about the infamous Peasant Railgun) weird things happen when you start trying to mix real-world physics with game rules. So be careful!

There are some features that reduce the fall damage you take like the Monk’s Slow Fall that they get at level 4. Depending on your Monk level and how far you’ve fallen, it might even negate all of the damage!

Additionally, a Barbarian that is currently using their Rage feature would have resistance to the damage from the fall.

This is because the Barbarian gains resistance to bludgeoning, piercing, and slashing damage when they are raging. (Note that the feature does not specifically say “…from weapons” which is why it applies here. It’s a small point with major implications!)

Meanwhile, spells like Levitate and Feather Fall can give you immunity to fall damage for the duration. Feather Fall slows the fall and lets you gently float to the ground while Levitate just might give you enough control to catch yourself and climb back up first!

A flying creature that is knocked prone or has its movement speed reduced to 0 feet begins falling. Similarly, if a spell or magic item that is allowing a creature to fly is negated, the creature also falls.

The exception is if the creature is able to hover. For example, a Flameskull or a Beholder wouldn’t have this issue where something like a Manticore or Wyvern would find itself having a very bad time.

Xanathar’s Guide to Everything introduces a special rule that applies to flying creatures that find themselves falling. The idea is that a flying creature would have a better chance of surviving a fall than a non-flying one.

If a flying creature is falling, subtract that creature’s flying speed from the distance it falls before taking damage.

So let’s say that the party manages to paralyze an imp and decides to throw it into a pit trap that is 100 feet deep.

The imp has a flying speed of 40 feet so we would calculate its falling damage as a 60 feet fall. When the imp hits the bottom of the pit, it will take 6d6 damage.

With only 10 hit points, it’s pretty likely that the imp will go splat. But it has a better chance of surviving than if it were taking the full 10d6 from the fall!

Now that we’ve covered how falling damage works in D&D 5e, let’s look at a few tweaks you might make to it in your games!

Depending on the size of the fall, it might be appropriate to use the Massive Damage rule.

This optional rule triggers when a character takes half of their maximum hit points worth of damage or more from a single source.

The character must make a DC 15 Constitution saving throw to avoid the Massive Damage effect. If they fail this saving throw, roll a d10 to determine what the effect is.

You can see the effects in the table below.

Let’s say Killian, the party’s Fighter, triggers a pit trap and falls 60 feet. His rough landing in the pit deals 6d6 damage for a total of 25 bludgeoning damage.

“I’m okay!” Killian calls out. He has a maximum HP of 36 so he should be healed back up in no time, right?

The DM has Killian roll a Constitution saving throw, but the dice are feeling fickle and Killian rolls for a total of 7.

Rolling a d10 to determine the effect of the massive damage, the DM sighs as they see the 2 on the dice in front of them.

“Killian is unconscious but stable,” the DM says, “the impact and massive damage has knocked him out.”

As the sound of a swarm of Kobolds is getting closer, the party has to think quickly. Who is going to heal Killian and get him out of the pit while the others hold off the Kobolds?

Taking a nasty fall might also result in a character taking an injury beyond what they’re likely used to at this point.

The Dungeon Master’s Guide has a table on page 272 with a list of suggested Lingering Injuries. The DM can change the effects to whatever makes the most sense in the scenario.

As a result of the fall, a character might walk with a limp which reduces their speed until they can recover.

They might sustain an internal injury that makes them have to beat a DC 15 Constitution save to push through the pain and take an action until they can heal.

Breaking a leg or arm will naturally decrease the character’s speed or ability to wield certain weapons or climb.

Lingering Injuries can be pretty brutal, so I’d recommend only using this if the group has specifically indicated that they want a game that is challenging, brutal, and realistic!

Both Lingering Injuries and Massive Damage appear on my list of 10 optional homebrew rules for D&D 5e. If you’re someone who likes to tinker with the game’s mechanics to enhance you and your group’s experience, I’d recommend checking that out!

No Cap on Damage

There’s something weird about the RAW damage for falling capping at 20d6.

You’re telling me that a Cloud Giant could throw a pesky adventurer off of their cloud thousands of feet in the air and an adventurer with the right amount of HP/levels/luck could survive?

If the Cloud Giant in question has decided they’ve had enough of Callus the Barbarian’s shenanigans, it’s totally possible for Callus to survive an incredible fall like that?!

Let’s say Callus has 150 hit points. Between being a fairly high level, maxing out his Constitution ability score, and taking the Tough feat, he can take a lot of punishment. Needless to say, this quick descent has caused Callus to also go into a blind rage as he rockets towards the ground below.

At 20d6, Callus takes maximum damage of 120 but that is halved because he is raging. He has just fallen somewhere around 10,000 feet and has only lost about 40% of his health!

I’m ALL FOR suspension of disbelief, but where is the actual threat here?!

The solution is simple: remove the damage cap.

It reminds me of a funny moment from season 1 of Critical Role in which Keyleth, the Druid, learns about falling damage the (very) hard way.

Notice how the character was given opportunities during her fall to save herself. Because of the size of the fall, it made sense to give her some reactions on her way down.

She initially tries to push herself away from the cliff face with a gust of wind. When she’s still on track to hit the rocks below, she uses her Wild Shape to turn into a goldfish.

The moment is just as hilarious as it is deadly!

But back to the point: removing the damage cap keeps the threat present. However, it’s only fair that a large fall will allow the player some opportunity to possibly save themselves with some quick thinking!

Hopefully this article has cleared up any confusion you might have about falling and falling damage in D&D 5e!

If you still have questions or have any falling stories (they’re always something else!) you’d like to share, reach out in the comments below!

Want to stay up to date with all the latest D&D tips, tricks, news, and more? Sign up for my newsletter using the form below to never miss a thing! 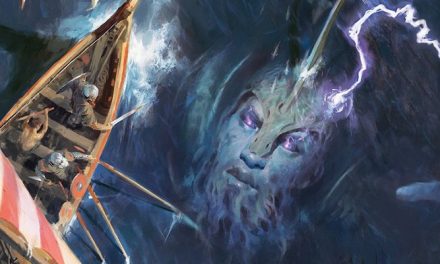