One of the most exciting things about building a campaign is creating a D&D villain that your players will love to hate.

As the game goes on and the plot thickens, it starts to feel personal to the players. There’s nothing quite like the tension that builds when approaching the showdown with a Big Bad Evil Guy when it’s been months (or even years!) in the making.

So what makes a truly epic villain?

Let’s go over what your BBEG needs to really get your players’ blood boiling!

Imagine a superhero movie where the hero only stops a couple of one-off crimes being committed by nameless criminals. It would be so boring and the “hero” would be completely forgettable.

Without great and fearsome villains, we wouldn’t have epic heroes!

Your D&D villain should be worthy of being your campaign’s BBEG. When it’s time for the final confrontation, the stakes should be high enough that the players feel like everything up to this point has served to prepare them for this all-or-nothing moment.

By this final confrontation, the party should have a clear connection to the BBEG.

While the villain didn’t know anything about them at the beginning, they have continued to get closer to him by disposing of his lieutenants and ruining his plans.

Villains aren’t created in a vacuum. Even a villain who only wants to see death and destruction must have some kind of motivation for doing so.

When creating your BBEG, ask yourself two questions:

If you have answers to these two questions, it gets much easier to craft the other aspects of their character.

“Tekrazriak, the Eternal” sounds much more informative and intimidating than “Tekrazriak the Still-Trying-To-Find-Himself-Y’know?” doesn’t it?

Also Check Out: 10 Excellent (and Underused!) Spells for Villains in D&D 5e!

The villain’s history explains why they are doing what they are doing. By giving your villain a history that explains their motivation, you add to your game’s immersion by having a three-dimensional antagonist.

They don’t need to have an entire novel as their backstory. However, figuring out some key moments in their past will give you plenty to work with.

What Type of Villain Are They?

With clear motivations and a history for this villain, we can establish what kind of villain they are. This will greatly influence your roleplaying and will also likely give you some ideas for the types of tactics that they use.

It’s very likely that your villain will fall into one of three categories: the True Villain, the Sympathetic Villain, or the Unpredictable Villain.

The True Villain is pure evil and can be thought of as the “classic villain.”

They aren’t meant to be sympathized with and very likely take pride in their cruel and villainous nature. This includes characters like Emperor Palpatine in Star Wars or Joffrey Baratheon in Game of Thrones.

Perhaps their villainy is a result of them falling through the cracks in society until they snap. Whatever the case, the players should be able to clearly empathize with the villain.

Characters like Magneto from X-Men, Arthur from Joker, or Handsome Jack from the Borderlands games are great examples of sympathetic villains.

Just take caution to reinforce that this character is still a villain who very likely has no intention of seeking redemption.

Your players shouldn’t finish their fight with your BBEG only to ask “are we the bad guys?” It makes it a little difficult to celebrate such a big moment when someone asks that kind of question.

Lastly, we arrive at the Unpredictable Villain. With these characters, it’s often difficult to tell if they’re the villain or not.

More often than not, these characters are primarily concerned with their own selfish motivations. If it advances their own motivations, this character has no problem working with the party one day and against them the next.

These villains are always interesting, but I haven’t personally seen them done well as a BBEG. They may be a powerful ally or servant of the BBEG and are typically fantastic characters in their own right (which is why they are on this list.)

These characters have the most impact when they should assist the party but betray them instead.

Characters like Saruman from The Lord of the Rings or Jarlaxle Baenre from the Forgotten Realms are examples of the Unpredictable Villain.

What Kind of Power Does the Villain Have?

When creating your villain, consider their strengths and how they use those to advance their goals.

Perhaps they are a brutal and powerful warlord who is leading a massive army to conquer the known world.

Or, on the other hand, they might be less inclined toward those tactics and favor their ability to gather information and manipulate others into their schemes.

Whatever methods they use, the villain knows to play to their own strengths and it’s important to consider what those strengths are. This adds yet another level of immersion to your game by making your villain just as believable as the party’s characters.

There are several types of “Power” that your villain can use to further their plans. For a full breakdown of these types of Power, check out my other article on The 8 Types of Power: Crafting a D&D Villain.

Give Your Villain Personality

Your villain should be believable and have a personality that commands attention. Description is a key element of Dungeons & Dragons as a whole, but this is especially true when it comes to your BBEG.

What do they look like? Are they well-composed or do they seem disheveled?

Distinctive features such as a large facial scar or a piercing stare add to the character’s presence in any scene that they are in. Perhaps they have some distinctive mannerisms like a raspy cough or a tendency to crack their knuckles when sizing up an opponent.

Additionally, pay special attention to how your villain moves when giving your descriptions.

The vast majority of communication is non-verbal and how your villain presents themselves can reveal a lot about their personality. Do they stomp forward or do they instead seem to glide across the ground?

Look to real-world actors for the inspiration behind how they’ve played iconic characters.

Anthony Hopkins said that he based his performance of Dr. Hannibal Lecter in The Silence of the Lambs on a crocodile and a tarantula. The character’s unnaturally still and unblinking presence creates tension even when he isn’t saying anything particularly dark.

Borrowing from that idea, a fun trick is to incorporate certain animal traits into how you play your villain!

As another example, the character of Alpha in The Walking Dead does something similar to Hopkins’ character.

When turning her head, she moves her head in a quick, serpentine motion as if ready to strike. She seems to hiss when she speaks and dominates the screen even when standing next to characters who stand way taller than her.

Because her gaze seems to always look past whoever she is talking to, the moments where she focuses her eyes on someone become particularly and immediately tense.

Adding elements of this to your own roleplaying as the villain is a great way to build their presence and personality.

Introduce Your Villain with Style

Last but certainly not least we come to the introduction.

At early levels, the party almost certainly doesn’t even hear the villain’s name. But as the adventure continues on, they may come to cross the BBEG’s lieutenants and henchmen.

As the story progresses, the fuse is lit and they come to hear more about the BBEG who is beginning to take more of an interest in this upstart band of heroes that are foiling his plans and becoming a thorn in his side.

When the story arrives at such a point that the party deserves the villain’s personal attention, it should be a big deal.

By introducing your villain with a bang and making it abundantly clear that “this guy is pretty freaking evil,” you can create a moment that stirs a ton of emotion in your players to hate this villain on a deeply personal level.

One of my personal favorite ways to do this is by having the villain capture a beloved NPC. When the party goes to rescue their friend, they meet the villain who proceeds to execute the character.

Have the villain make it perfectly clear to the party that this wouldn’t have happened if they had stayed out of his way before leaving his henchmen to dispose of the party. He may even make a comment about how they’ve left their home undefended while they were coming to save their friend with an evil laugh.

Because they are bound to be hyper-focused on taking the BBEG down at this point, you want to be sure to have a clear vision with few distractions as you move to the villain’s endgame.

Unless your villain is conjuring an aspect of themselves, using the Magic Mouth spell, or has an absolutely fool-proof escape plan, don’t bother with monologues.

Monologues are fun and largely fall into a type of Villains 101 category, but they work much better in movies and video games than they do in TTRPGs.

Your players will literally never let you do this.

Someone is going to throw a fireball, shoot a crossbow, or go charging.

When I think back to the best campaigns I’ve ever played in or run, the ones that stand out the most are those with the best villains.

They were that constant challenge that pushed the party to rise to new heights. It took a concentrated effort and a ton of risk to beat them. Even years later, we can look back with pride as we overcame villains that we still remember to this day!

I said that to say: spending time building out who your villain is and what they want is ABSOLUTELY worth it.

Got a villain you’re proud of or an idea you’re building out? Let’s chat in the comments!

Want a laugh? Check out what happened when I had an AI make a villain! (It gets really weird…)

If you found this article helpful and want to support the site, you can buy me a coffee here! The Legend of the Peasant Railgun in D&D 5e 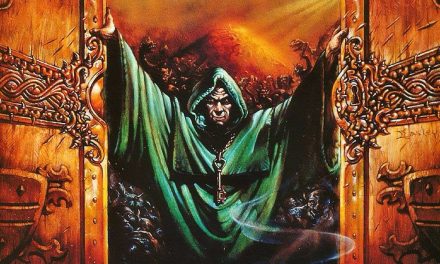