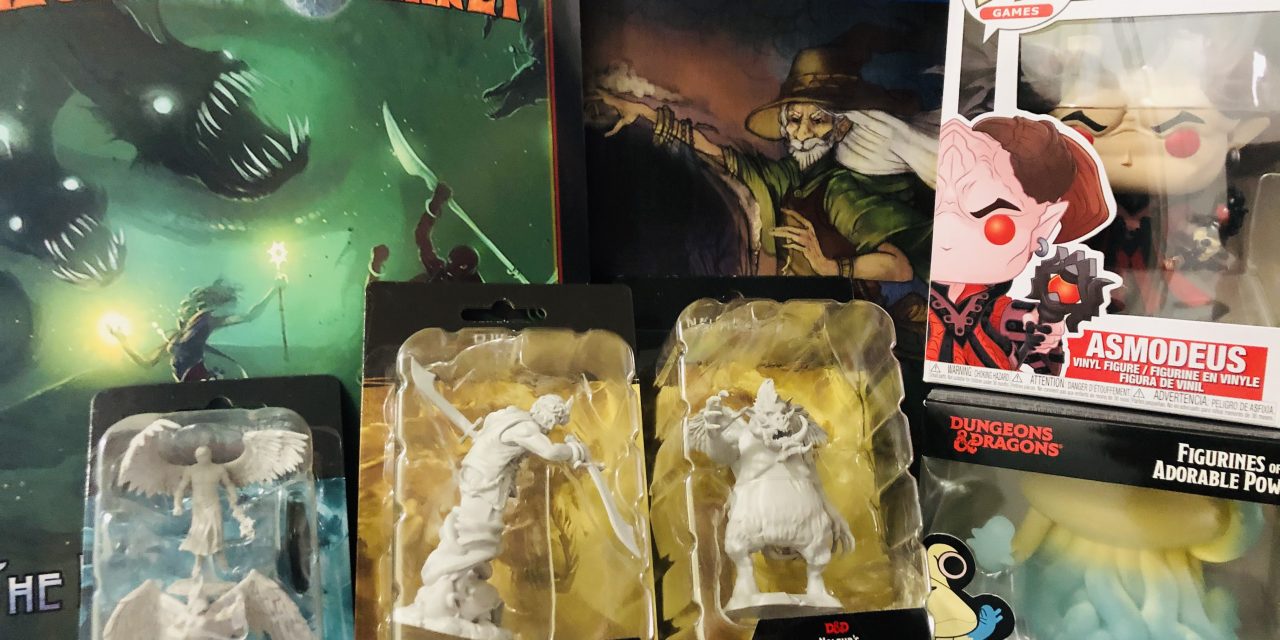 I found myself on a somewhat-impulsive trip to my Friendly Local Game Store last night. Because “self-control” isn’t something that I’ve ever been accused of having, I found myself leaving with a decent haul of stuff that I simply couldn’t live without.

So I figured I’d try something new as far as blog content goes and share my finds!

I’m considering the possibility of doing a monthly round-up post to share what I find myself purchasing each month. I think it’s a weird idea, but it could be fun. I’m not sure though.

If that’s something that you would find interesting, let me know in the comments!

That said, let’s dive into the January loot haul!

I think we all developed some new hobbies during 2020.

For me, it was painting miniatures. I’m not sure if I would be considered “good” or not, but it’s been fun! Not only is it a relaxing and creative hobby, but there’s definitely an extra “fun” factor when I get to throw miniatures that I’ve painted onto the table.

There have been some really nice new models being released by Nozul’s Marvelous Miniatures! With my biggest concerns with any miniature being the level of detail and the general sturdiness of the model, I haven’t been disappointed by Nozul’s miniatures yet!

The first one that I had to scoop up was the 2-pack that includes two of my favorite entries in the Monster Manual: the Deva and the Erinyes.

I’m reasonably sure that one of my groups is going to be encountering one of these pretty soon, so I’m excited to have a miniature to use for the occasion. I may even have to figure out a way to work the other one into the story as well!

I also picked up a Nalfeshnee and a Djinni.

I’m not sure when I’ll finally get to use a Nalfeshnee. It’s one of those enemies that I just haven’t ever gotten around to running against my players.

When they’re at an appropriate enough level to justify the encounter, it hasn’t fit the story’s theme. When it’s fit the theme, they don’t get to an appropriate level!

But this may spur me to finally write up an adventure to make it happen!

As for the Djinni, I’m particularly excited about this one.

The Djinn are incredibly fascinating to me. As I mentioned in my Top 10 Subclasses in Tasha’s Cauldron of Everything article, I’m particularly drawn to the Genie Patron Warlock.

If my next character ends up being a Warlock, it would be kind of fun to have a miniature of their Genie patron at the table. Otherwise, I’ll probably have to get to work planning for other ways to bust this miniature out!

Legendary Planet: The Depths of Desperation

Next among my finds, I stumbled upon the Legendary Planet: The Depths of Desperation module from Legendary Games.

Full disclosure: I was so captivated by the book’s art and themes that I didn’t even realize that this is a chapter in a larger adventure path until I got home and read more of it.

That said, upon an initial skimming of the book, I am really captivated by the story’s blend of sci-fi and fantasy!

As an adventure for level 14-17 characters, this definitely seems like something can bring a ton of excitement to higher-level play.

Most striking to me is that the adventure has added an inspired selection of aquatic enemies for the party to face. As much as I love underwater adventures, I feel that they are notoriously difficult to do in a way that stays compelling and fun.

At a cursory glance, this adventure seems to do just that. I’m very much looking forward to running this for my players and being able to release a review!

With this being my first impression of the work of Legendary Games, I’m already finding myself looking at the other adventures they have to offer!

So… This is seriously cool!

To prevent this from beginning a history lesson (though it may make for an interesting article in the future…), I’ll keep this bit pretty brief and to-the-point.

While 5e has completely revolutionized Dungeons & Dragons and risen to incredible levels of popularity, the history of D&D is something that is also treasured and worth preserving.

I first began playing D&D in the early 2000s following the release of Version 3.5. I’ve maintained a respect for previous versions of the game, but I haven’t actually played them because there was always so much readily-available content for the current system.

Much like the legendary Basic & Expert box of the days of old, you open this box and find everything that you need to play. You get the Player’s Guide, Dungeon Guide, 2 Modules (The Haunted Tower and Fog of War), and dice!

For those of us who haven’t gotten to play “Old school D&D” before, this is a fantastic and cost-effective way to get that same experience as our gaming predecessors!

I’m very impressed by this set’s very clear focus on having a very quick startup time. With any system, I greatly appreciate having a focus on streamlining the learning process so that players can quickly get to playing the game.

I’m looking forward to running this!

If you’d like to pick up a set, you can get PDFs here at DriveThruRPG.

For a physical set, check out Pacesetter’s store here!

Most impulsively of all, I had to scoop up a couple of collectibles.

Already, the Flumph Figurine of Adorable Power is sitting next to my computer monitor as I’m typing. It makes it a little difficult to not feel inspired!

As for the Asmodeus Funko Pop, I’ll figure out where to put him. Because I plan on expanding this blog to also include a Youtube channel, I think that he will make for a good addition to a backdrop. But we’ll see!

So, despite planning on only picking up a miniature or two, I’m very happy with this month’s finds!

Once I get a chance to run The Depths of Desperation and the BX RPG, I’m definitely looking forward to writing some proper reviews!

As I said at the start of this article, I’m deciding whether or not to do a regular “loot haul” type of round-up post. There’s just so many fun things that can be included to add to the gaming experience that it’s nearly impossible to keep up with it all!

Let me know in the comments whether or not more posts like this would be helpful to you in finding new additions for your D&D game!