If swashbuckling space adventure and exploration in the Astral Sea sounds like something you’d like to bring to your D&D game, Spelljammer: Adventures in Space has what you’re looking for.

While the original Spelljammer from 1989 was never really up my alley, there’s no denying its popularity. For many years in 5e’s lifetime, fans have been asking when Spelljammer would finally come to D&D 5e.

In some ways, being able to go into this release without having experience from the old-school Spelljammer to compare it to was exciting.

Maybe I never got into the setting in the past, but could this convince me to rally the crew and set sail?

What Is Spelljammer: Adventures in Space?

Spelljammer is a unique setting that takes players away from the Material Plane and into the vast reaches of space. Navigating Wildspace and the Astral Sea beyond it, who knows what worlds you will discover?

This theme of exploration is core to Spelljammer. In fact, the name of this setting is also what those who pilot spelljamming ships are called!

One of the biggest appeals of a Spelljammer adventure is just how open it is. Every location can be entirely different from the next with adventures capturing the excitement of classic pulp-SciFi adventures.

It’s a departure from the traditional high fantasy of D&D with potential as endless as space itself.

The format of Spelljammer: Adventures in Space is something that we haven’t seen to date in D&D 5e. Instead of being a single book, it is split into three books and a DM screen that are all nested within a convenient slipcase.

The books themselves are 64 pages in length each and are bursting with some brilliantly captivating artwork.

Meanwhile, the DM screen is very sturdy and well-made with plenty of handy references for DMs running a Spelljammer campaign.

Check in the back of the Astral Adventurer’s Guide for a glossy double-sided map that shows both the top and underside of the Rock of Bral. Since this asteroid-city serves as both an adventure location and hub for your campaigns, you’ll get some good use out of the map!

You’ll also find information for 16 different Spelljammer ships and some useful setting information for the Rock of Bral alongside some other info for DMs running adventurers in the Astral Sea.

Of course, when you’re having a space adventure things like air and gravity are important considerations so there are rules and mechanics covering that.

From there, there’s information for DMs regarding creating Wildspace systems, traveling between worlds and systems, and things like ship-to-ship combat and crashing.

My favorite part of the Astral Adventurer’s Guide is the various spelljammer ships.

They feel fun and unique, though I would have personally liked to see more details, equipment variations, and guidance for creating your own ship.

There’s enough here to inform how you might homebrew your own stuff, though having a type of “toolbox” would have really made this section pop.

The last chapter of the Astral Adventurer’s Guide is all about the Rock of Bral. This city built on an asteroid makes a great hub for your group’s adventures.

With the lore and locations included in this section, you can even have some exciting adventures here as well to get players familiar with the city and its various colorful residents.

Boo’s Astral Menagerie serves as the Spelljammer Monster Manual. It contains over 60 creatures for players to encounter while navigating Wildspace.

Of course, you’ll also get some random encounter tables to keep things exciting as the party is traveling. Encounters include those in Wildspace, those in the Astral Sea, and encounters with other ships.

I love the variety in Boo’s Astral Menagerie. It’s certainly the strongest book in the set and one that I found myself reading through over and over again.

Some of the creatures within this book are truly terrifying entities while others aren’t afraid to lean heavily into the campiness that influences of the Spelljammer setting are so known for.

I didn’t know that I need my players to encounter Space Clowns and Vampirates until I read this book. Even if they don’t appear in a Spelljammer game, it’s going to happen.

The third book included in Spelljammer: Adventures in Space serves as an all-hands-on-deck introduction to the Spelljammer setting.

Light of Xaryxis is a short, episodic adventure that is meant to take players from level 5 to level 8.

The vibe of this adventure is very “space opera” with plenty of clear inspiration from pulp classics like Flash Gordon and Buck Rogers in the 25th Century.

Light of Xaryxis is broken into 4 parts with 3 chapters each. Each chapter is able to be completed in a regular session which means that the adventure as written can be completed in 12 sessions.

Despite being a relatively quick adventure with a somewhat small scope, it’s well-written and fun. Just like the pulp classics that inspire the adventure, each chapter ends with a cliffhanger that will keep players excited for the next session.

But what I appreciate most about Light of Xaryxis is that it embraces the fact that the players won’t always succeed in their goals.

Rather than forcing the DM to “fail forward” as much as it takes to get the story back on track, Light of Xaryxis factors in plenty of ways to keep the story moving forward in an exciting way even when things don’t work as the party might have hoped.

That’s not to say the adventure is pulling its punches. There are still plenty of challenges!

But this type of design approach, in my opinion, encourages players to really play their character instead of worrying about making the “right” decision.

The ending feels a little ham-fisted and railroad-y, but I’m not going to complain too much about that. Either way, Light of Xaryxis is an exciting adventure and introduction to the world of Spelljammer. Spelljammer: Adventures in Space (D&D Campaign Collection)
$38.98
Order on Amazon!
We earn a commission if you make a purchase, at no additional cost to you.

There is a lot of eye candy in this set. The art really captures the feeling of the themes that Spelljammer tries to evoke and is some of the best of any release we’ve seen for D&D 5e.

Having the set consist of three books instead of just one is a good design choice that I wasn’t sure about at first but ultimately really warmed up to.

Being able to hand one of my player’s the Astral Adventurer’s Guide while I continued to run the adventure meant that we could keep the game rolling without having to stop to look things up.

And speaking of the adventure…

Despite how thin the set is, Light of Xaryxis is a fun adventure that definitely works well as an introduction to what Spelljammer is all about.

I’m really not a huge sci-fi fan, but the themes here are exciting without feeling like they’re writing over what makes D&D… well… D&D!

Instead, the themes build upon certain aspects of what makes D&D so fun and give you an infinitely open playground to explore that.

After all, the idea of exploration is one of the core pillars of what makes a good D&D adventure!

So why not take that idea to the farthest reaches of space that you possibly can?

With the excellent selection of creatures to encounter in Boo’s Astral Menagerie, there will always be something exciting to discover.

The contents of this set are very wide-reaching with a huge amount of new mechanics, options, considerations, locations, and more. However, that does come at the cost of how deep those contents are able to go.

At 64 pages per book, that’s a total of 192 pages of content (not factoring out things like full-page artwork) compared to the standard 220-250 pages of pretty much every other release for 5e.

There’s such a missed opportunity here that could really only be addressed by releasing an entire book full of ship mechanics.

But, as it stands, the Astral Sea swashbuckling that Spelljammer promises as a core experience ends up just feeling kind of tacked on. The themes are there, but the mechanics required to really bring those themes to life are noticeably absent.

As much as I love the large variety of Spelljammer ships, it feels wasted without the in-depth mechanics required to really use them.

I want the tension of navigating asteroid fields and high-stakes ship-to-ship combat that gets the blood pumping. Without detailed mechanics, these are more like narrative devices and just don’t provide the same thrill.

Spelljammer: Adventures in Space makes a huge promise, but it’s largely up to the DM to make good on it.

But despite how thin and surface-level much of this set feels, there’s an undeniable potential here for something great.

To be honest, I would have even happily paid $100 for the set if it were fully fleshed out with everything needed to make the setting truly “work.”

I’ve waffled back and forth on Spelljammer: Adventures in Space more than I care to admit. Hence why this review is finally coming three weeks after its release date.

But I just can’t get over how thin the actual content feels in Spelljammer: Adventures in Space. It’s really my sole complaint but it’s such a massive issue that it just drags everything down for me.

I’m not going to say Spelljammer: Adventures in Space is a flop, but it’s the first release in years that has left me scratching my head in disappointment.

For those who enjoy tinkering or creating their own mechanics and homebrew content, this set makes a good jumping-off point.

If you want your D&D game to take to the stars and don’t mind putting in the work to flesh out the mechanics presented in Spelljammer: Adventures in Space, this set gives you a starting point. You’ll have plenty of locations, monsters, and lore to build it out.

But for those who want something that fundamentally works in an exciting way right out of the box (or slipcase in this case), they’ll be disappointed.

Spelljammer: Adventures in Space (D&D Campaign Collection)
$38.98
Order on Amazon!
We earn a commission if you make a purchase, at no additional cost to you.

For my two cents, I think that this is a set that will improve if WOTC continues to invest in it. Giving us books with more detailed mechanics and a full “proper” adventure would round this out very well.

I think it would be a bad idea on their part to let this be the “be all, end all” of Spelljammer for 5e.

For whatever the thoughts of a crazy Druid on this little corner of the internet are worth, this set sold me on the theme. Now give me the mechanics I need to actually do something with it.

But you’ve read my opinions on this set. Now I’m curious to read yours! Let’s chat in the comments! Review – Strixhaven: A Curriculum of Chaos | Class Is In Session! 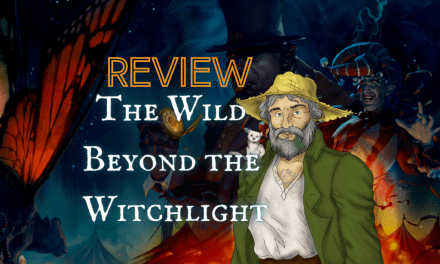 Review: The Wild Beyond The Witchlight Is A Different Kind of D&D Adventure 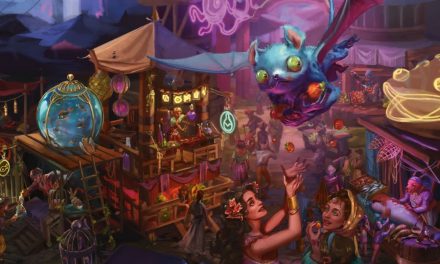